Freedom to enjoy the benefits of modern science

On behalf of Indian farmers, the Shetkari Sanghatana demands access to new science and technologies. The Sanghatana has six specific demands given below.

The Kisan Satyagraha, civil disobedience, began in Akola district of Maharashtra, in June 2019. The principal aim of the Satyagraha is to highlight the desperate need for new technologies in agriculture. 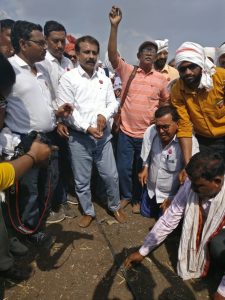 Shri Lalit Bahale, a local farmer, began the Satyagraha by symbolically sowing the seeds of HTBt cotton, and Bt brinjal, on a two-acre plot in Akoli Jahagir, a small village in Akot tehsil, in Akola district, on June 10, 2019.

Low input – high output agriculture is the need of the hour to transform Indian agriculture. This is possible only when our scientists are allowed the freedom to explore new vistas. And when our farmers enjoy the freedom to try out the new advances in modern science and technology.

With increasing scarcity of labour in rural India, cotton farmers are eager to find alternative ways to reduce the cost of labour, and stay competitive in the global market. De-weeding traditionally is an extremely labour intensive activity. And labour cost accounts for well over 40% of the cost of growing cotton. It is in this context that herbicide tolerant (HT) new generation Bt cotton has attracted the attention of many farmers.

In addition, with regular de-weeding, farmers have reported a decline in population of other pests too. Farmers have felt the impact of HTBt cotton in terms of lower costs and reduced crop losses, and therefore higher production and income. A field survey conducted by the Department of Biotechnology in 2017, reported that 15% of farmers in Andhra Pradesh, Gujarat, Maharashtra, and Telangana had planted HT Bt cotton.

Likewise, farmers pay a high cost for frequent application of pesticides on brinjal plants. Brinjal, along with chilli are the two vegetable crops where pesticide use is the highest. Farmers’ are exposed to pesticides, and consumers too are potentially vulnerable to  chemical residues in vegetables. Bt brinjal reduces pest infestation, lowers the input costs, and significantly increases marketable produce, contributing to the greater income and welfare of farmers.

The Shetkari Sanghatana had informed the Minister of Environment and Forest (MoEF) about the proposed Kisan Satyagraha before the campaign started.

The Shetkari Sanghatana doesn’t encourage breaking of laws and regulations. But in the current situation farmers access to advances in science and technology has been stalled for over a decade, despite the availability of Bt brinjal and GM mustard seeds developed within the country.

This Kisan Satyagraha is, therefore, primarily aimed to highlighting the plight of the farmers. This is an urgent plea to enable the farmers to have access to modern technologies, just like all other sectors of the Indian economy. The Satyagraha seeks to sensitise policy makers and build awareness among citizens about the unjust restraints placed on Indian farmers. 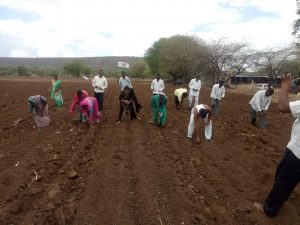 Sowing of HTBt cotton by Kisan Satyagrahis in Maharashtra

The Shetkari Sanghatana has identified six key demands as the basis for the ongoing Kisan Satyagraha.

After the green revolution in the 1970s, cotton has been the most successful agricultural produce in the past two decades. Powered by Bt cotton, in just ten years, our farmers have made India the biggest cotton producer, and the second largest exporter of cotton in the world.

However, Bt gene is just one small aspect of genetic engineering for control of lepidopeteran insects. Agbiotech offers a wide range of strategies to manage diverse challenges confronting agriculture, such as salinity and drought tolerance, herbicide tolerance, improved nutrient use by plants, delayed ripening of crops to extend shelf life, crops fortified with necessary vitamins, hybrid technology in self-pollinated crops, and many others.

Across the world a dozen GM crops have been approved so far, and these are being grown over 185 million hectares, in more than two dozen countries. Hundreds of millions of people, including Indians travelling abroad, have consumed many products made from GM crops over the past two decades, without any adverse impact on health.

The potential of agbiotech to improve farmers’ income and welfare, and create new economic and employment opportunities needs to be recognised, and facilitated by the government. Information technology opened new vistas for young educated Indians. It spurred entrepreneurs and technologists to seek new avenues, creating huge economic and employment opportunities. For the past twenty years, while the potential of agbiotech has been repeatedly stressed, the regulatory bottlenecks and political indecisiveness have robbed Indian farmers access to latest advances in science and technology, while stifling the prospect of bright young Indians, who are looking for new opportunities in agbiotech.

The Shetkari Sanghatana invites every farmer and urban dweller, irrespective of organisational, social or political affiliations, to join this campaign to transform the face of Indian agriculture. The  Sanghatana hopes that an early resolution of these issues would greatly contribute to the welfare of every Indian, consumers and producers of crops.

To support this Kisan Satyagraha, and to share comments and suggestions, please write to

You may also like to review the Farmers’ Manifesto for Freedom, and endorse it by adding your name. So far nearly 200 people from different walks of life, farmers and non-farmers, economists and scientists, professionals and opinion makers, and others, have Endorsed the Farmers’ Manifesto.